"The Ram" - From Chadd's Collection 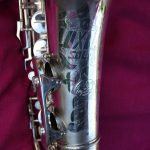 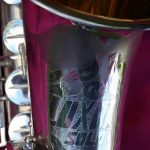 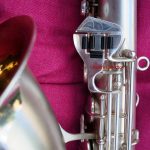 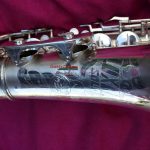 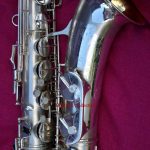 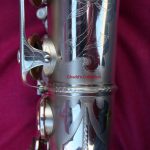 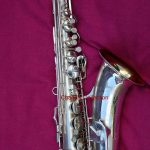 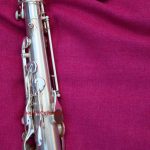 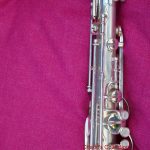 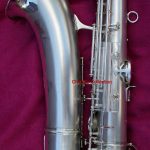 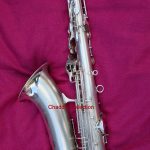 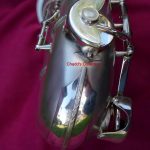 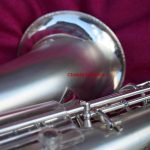 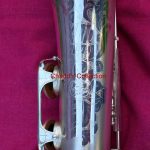 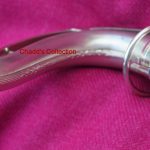 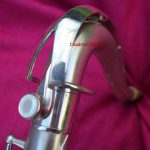 From Chadd's Collection: I am really fascinated by this sax. There are so many ornate features!

It has some of the most elaborate tube rings with 3D weave on the bell lip too! The sheet metal octave key on the neck is where she gets her nickname: "The Ram", the pearl bonuses are great--even on the neck screw!, I love the light engraving on the key guards and the G# too, the lucite pants guard like JK or older Kolhert, and the raise bell logo.

FINISH: 99% original satin/shiny Silver Plate with goldwash bell....well, I think the Bell is actually a lacquer judging by the flaking part. I still need to electro test that. It could have been gold but not sticking to the brass (at the lip where it pealed off). I also did spot silver plate 4 small areas that shows some wear. You won't find where.

DATING: This still needs better surety, but I've run into my own trickery to date this model. Some Serial # charts may put 674,142 into the 50s,  year 1959. I had also owned the Alto "Luxor Solo" (You can see it in Chadd's Collection) and it didn't have the matte silver finish. My 1959 dating was the best guess I had until I had a client tell me about his buying one new in 1984! However, due to the two versions (Version 1 and 2, with different engravings).

Many thanks to my friend, Helen, at BassicSax for some info on this. Ironically, it's the exact sax she featured on her blog from many years ago but never in her possession if I recall correctly.

I don't claim to know this for fact:
The history here is a bit scarce and tricky. From my own brief research, they say these are hit-or-miss saxes.  Talk of Romanian makers, made in Timisoara, Romania to market in Hungry. Just a whole wild bit of cross-country marketing and imports (to Germany/Czech also?). There's so much more to be dug up. I've also talked with other saxophone experts and a potential link to Dörfler & Jörka designs. At any rate, we can all see the engineering pedigree for lineages of German/Northern Europe/Czech saxophone.

***Also, I believe this is Version 1, by early dating comps, that has the fancier engraving with the raise logo. The other examples were all standard engravings. So that being said, I'll lean towards the 1970s.

The neck support also has the 3D weave! AND on the under-bell lip, around the bow connections, and on the bow ridge!

PADS: In great condition, hardly used. It was a new rebuild when I bought it. Unknown rebuilder. She has tan prestini (?)pads and 50% flat metal resos with rivet. The tone is very Czech-ish. Not as bold a Keilwerth but not gross and bright. She has some nice focus and power hidden in her sultry satin finish. Her acoustics hit the Mid-Trebles pretty hard and focused - so it's not a "quiet, mellow, muted, fat, vintage-sax tone".

For now, my only two complaints are the G# trill key is annoying (likely to get bent to a proper, playable location--lower) and the poor balance of the neck strap. You can see that someone else agreed enough to add and second one...IN THE WRONG SPOT...it needed to be 1.5inches lower. !@#$% I considered whether to fix that in time, but alas, I left if for now. THE OTHER BAD: The only thing that I have run into is the A2 venting -- "hissy octave" at times. Different mouthpieces will affect this issue. Although, a good player was blowing bigger and didn't notice this on a test run.

Other testing notes: Helen was in the shop recently and asked if this one was for sale as she was having a blast with it's unique tone (she loves all saxes with something special). And she was giving it a hard, loud test run on her Dukoff. PS - she didn't even notice the A2 that I did. Perhaps that was my younger self testing it on the Brilhart Tonalin.

Sorry ...nothing at this time

Other info contributed by interested people who chimed in to WWS:

"Here is some info you may find interesting. I bought one of these new in 1976. At that time, they were the cheapest ‘student’ instrument on the UK market, and I paid £135 for it. I suspect this one is the same era, as it is identical other than being silver plated, mine was gold lacquer. The original case was amazing, like a silk lined Transylvanian coffin. They seem to be very rare now. I always assumed they were made in Romania as stated, but the theory that they were actually made in the former GDR is a possibility I suppose. It was a very nice instrument and played very well. Hope this may help -WT"

"In 1896 the violin maker founded Antal Braun (1877-1928) a Workshop in Temesvár (Timişoara) in Banat (at that time Austria-Hungary), at that time a "musical center" where he made various instruments. There were also repaired instruments and tuned brass instruments.
After his father's death, his son Anton Michael (1911-1978), saxophonist, took over the business at the age of almost eighteen. During his wandering years he worked for V. Kohlert's sons and Julius Keilwerth in Graslitz. In the mid-1930s he built several saxophones inspired by the architecture of American Buescher Altos.
From 1945, a large part of the German population was deported and expropriated, and after 1948, under Communist rule, production plants were nationalized and merged into cooperatives, as was similarly the case in the Music angle happened at B&S and Amati.
Starting in 1958, craft businesses had to and the two of you will also be joining forces. This is how the state cooperative "Timis", in which saxophones are known as "Superior" and with soldered tone holes, also for left-handers. As with guitarists, there were saxophonists of the indigenous
Folk music scene many left-handers. These Instruments have nothing to do with the "Arta Guban" saxophones."

If you really want some more information, I suggest you read this post as one of the most thorough discussions: https://cafesaxophone.com/threads/arta-guban-tenor.2774/page-2