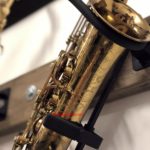 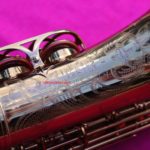 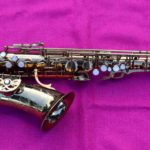 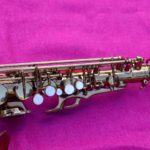 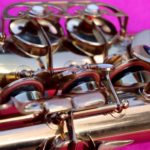 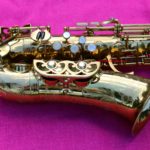 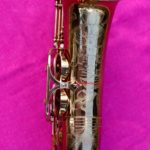 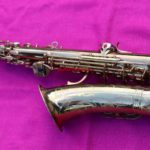 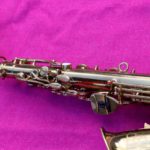 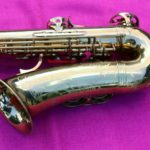 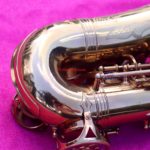 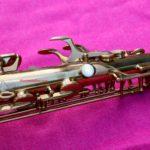 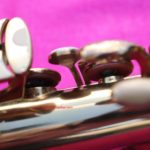 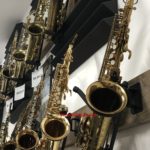 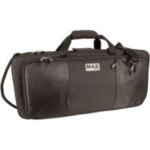 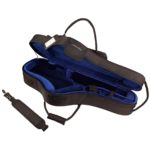 I have to admit that capturing this sax's true color was evading my cameras. It is beautiful "1950s" deep, golden color; prettier than the photos!

Rebuilt by WWS in summer of 2020: Prestini Tan pads and subtle Premium upgrades to moving mechanics. The sax has nearly all the original resonators (see PADS below) and had very minor dent work down in the bow.  Blue needle springs all look great. This is the prettiest example from this era that I've seen. By dating, I'll mark this at 1952-3 and in direct competition against Selmer's SBA, just $1,000s less by cost now.

A rare Buffet alto sax in original lacquer. It's always fun to learn the early 40s model was never intended to be called the "SA 18-20" nickname that stuck, but rather that is the Incorporated label plus an address numbers. The true SA models are even more beautifully engraved with scroll work wrapping the bell. However, this sax is more like a transitional "Dynaction" than the bell label would have you believe. I am adding this info to the description because I have yet to read about the various changes in the Dynaction line and the bell labeling that can be misleading. The Buffet history on these is very limited and this one has a later serial number than would be on SA18-20s:

RESEARCH: It is possible this is more appropriately labeled as Buffet "Dynaction" Model A without the label yet on this serial number. (most SA18-20s would have had wire bell guards vs the later sheet metal, and the serial numbers starting with a "1...". This #2,588 is in the mid-range of the #1 - #4,700 of the Dynaction models. There could also be room to better label models with the SA 18-20 Version 1 vs Version 2; or a Dynaction model A vs model B. The engraving changed in the middle of the run, my estimate at this time is between #3,400-4,400. Saxpics comments on Dynaction resonators: " I can conclude that the original setup of these horns included THICK flat metal, screw-in resonators. That not only gives these horns the traditional dark Buffet sound, but also provides a bit of projection."

DIFFERENCES: SA 18-20 Version 2 is better labeled a Dynaction Model A: Where it has the "SA" name on the bell, however, the bell-to-body brace has changed, as well as no longer having the Eb trill pad, and also the added sheet-guard design on the bell keys that we commonly know, also the engraving version 1. It should also be noted that the necks look basically identical, in that they did not put the under-brace on the neck until into the Super Dynaction run (estimated around Ser. #5,000s, I've seen late #5,9xx with the neck brace on alto.)

PADS & Resos: WWS Standard Vintage Rebuild with tan pads and original screw-in resos(very large, flat with high center). Note: one missing reso on the A key was substituted with a Noyak(as matching shape). Palm key resos (x3 + E3) were gone, similar to Buescher resos and now have a standard rivet only.

CASE: It will come with a brand new, Protec MAX case; or upgrade to a Protec ProPac for little more money. (consider a wrap style or rectangle). + a vintage end plug.

MOUTHPIECE: I have found that this sax may be particular with mouthpiece pairing and, after a test of several mouthpieces in the shop, we found that the Geo M Bundy rubber gave the best, centered control. I am not surprised that a 1940s mouthpiece pairs with a 1940/50s sax! Mouthpiece used to be listed separately for $119.00. 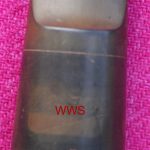 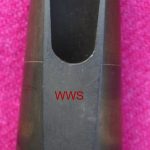