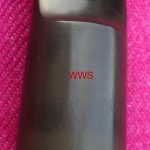 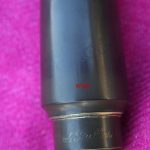 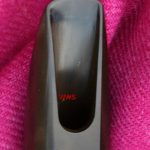 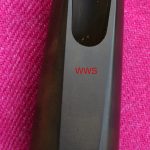 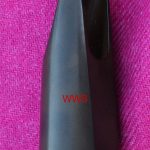 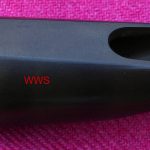 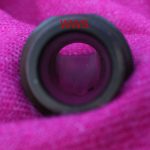 These are one of the best Hard Rubber Mouthpieces ever made. We got it as an altered #6 tip and I'll have Bob Carpenter open it up to perfection... There was a minor tooth groove I had Bob fix also. These have a a Nice big sound, medium tone, not too dark, not too bright, Sarge had THREE in his collection for a while, It's "best of" material! These often out-play vintage rubber Otto Links but are more affordable. It looks like it was well played, but was made in the late 60's, serial number 013167. You don't often see "6" facings on this. It arrived slightly larger than original tip, measuring 0.093". Bob opened it up to 0.103"...technically that makes it an 8* tip. Considering Bob's beautiful reface, the price is going to be 549.00. It will probably sell quickly, as i have seen them sell at ebay for 599.00.
549.00 ... After the reface Bob said, "You're not getting it back." (The highest compliment he has ever said about a mouthpiece. He was serious.) "I have 3 in my collection, and I intend to make it 4." Needless to say, I got it back but that was because I was supposed to hoard it for my personal collection.

Sound File for you to enjoy: