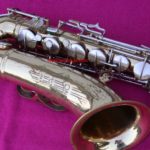 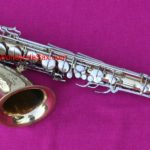 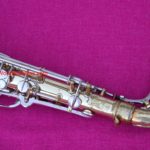 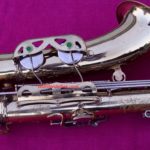 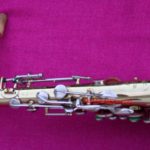 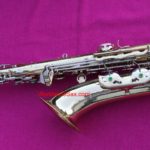 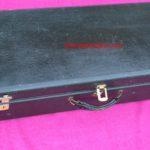 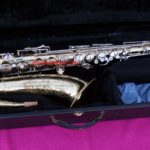 An affordable 10M - Yeah Buddy! Don't knock on the 60s era 10M too harshly. It still sounds like a 10M, but the snobs will overlook this horn. Trust me, it's good but obviously is no match against a 10M from 1935-42($3000-4500 duh). Previously rebuilt at WWS by the master, Sarge; this sax was owned by a friend who had a stable of saxes to rotate between. Thus, the pads didn't get worn out much considering the rebuild was from a few years ago. We took the sax back in on trade and it still played effortlessly down through the sax.

Cosmetics to mention - Neck: The photos will show most of the wear and tear of the years. I actually recall Sarge working on the neck to bring it back to life!!!(many days of dent work.) This neck is great for playing! wow, it has a crispness and tone for the airflow (my voodoo idea) that is like the golf ball effect - dented brass speeds up airflow. How do I know? well, we tested another pretty neck. The [golfball neck] played better.

PADS: the setup is a WWS Vintage Rebuild with tan pads on 50% flat resos with rivet (similar to Conn originals). Sarge did in 2008 or so and the previous owner had a few saxes to rotate with; this one had little use. The pads have a ton of life left on them; expect little to no problems over the next 1-5 years.

CASE: a very nice square case (looks like a Selmer).