a rare classic from Sarge's Collection (his description): 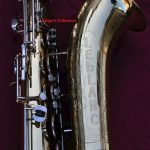 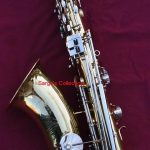 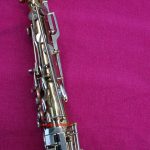 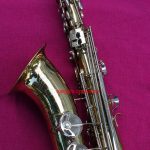 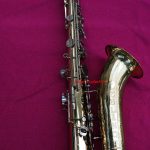 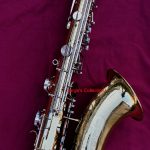 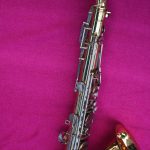 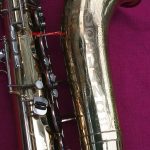 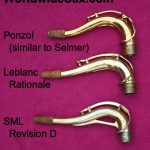 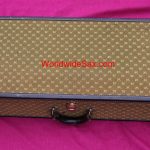 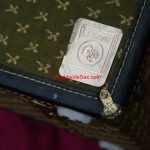 One of the coolest saxophones ever made! - Made to solve most all of the "saxophone issues" such as stuffy notes, trouble intonation areas and note passages. Data would suggest that there were less than 750 (alto and tenor) ever made.  The design with intonation and evenness with tonehole venting was also so engineered that it has mass amounts of screw adjusters. I have seen multiple variations on this model as they may have made changes along the design (different neck emblems, octave keys..., most notable) At the time of this last edit(6/2019), my data tracks these to Serial numbers #122-790 for altos and tenors)

In Sarge's Own words:

This is an amazing and rare Leblanc Tenor saxophone, a pro horn with the unique Leblanc mechanism, where the G# tone hole is at the rear and all the front pads remain open - the fingerings possible on a Leblanc are far more versatile than a conventional sax allowing for easier transitions in what are usually difficult passages - as well as multiple false fingerings and a greater range of altissimo fingerings. The Leblanc has a strong individual voice and speaks extremely well, one of the great advantages of the system is that normally stuffy notes like middle D and E speak with a clear open voice - the uniformity throughout the range is simply unachievable in any other horn. This one has at least 95% original lacquer and is in top notch condition.  I haven't had to do too much to it, except a minor tune up. It even has the original green print case in great shape! Serial #513.

That's a classic "Goldbeck and Co" mouthpiece on her, that i opened up myself and made a custom ligature for.  These have a very, very vintage sound, that's fun to play around with. (not included with sale)

Chadd comments: wacky, cool, weird, unique...If a person made this THEIR sax, I think they might be unstoppable. I need to make a SOUND FILE.  VERY POWERFUL, CLEAR TONE!  Study the neck!: it has much less [hump] compared with other tenors. It was Rebuilt my me (chadd) and has sat basically unplayed since. There are a few of the locking nuts missing from age, but all the adjustment screws are present. You think the over did it? Actually during my rebuilding of it, I found 1-2 spots that would have allowed me even better precision for adjustments!