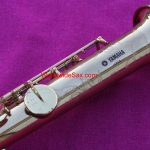 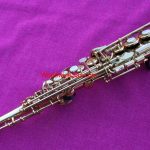 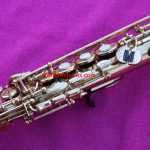 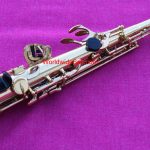 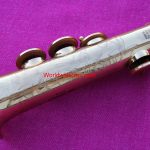 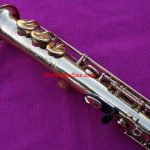 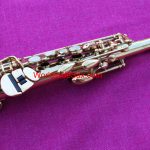 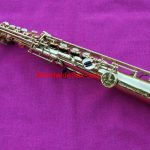 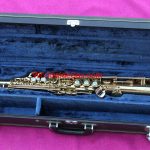 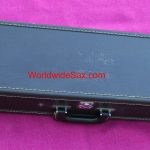 Highly sought after "purple logo" YSS-62 - Serial # 10,8xx, original lacquer in good, used, condition. Keyed to high F# also. It's in relatively clean condition with the pictures telling the story; I'll note the upper pip either has an acid bleed or a light resolder. This sax was owned by an adult player and played/loved well. It arrived to WWS with the many of the original factory pads in it. It does play decent right now to test and get a vibe on its tone and ergos - I like it. (This is the older, deeper tone from the "purple logo" era.)

***WWS RESEARCH REVIEW: As of March 2019, through all my research I have not stumbled upon anyone who noted that the YSS-62 "purple logo" had two different series. These purple logos had at least one change that I noticed. I am reporting that around serial number 10,000 there was the change to the low C# tonehole placement. According to the photos I could find online, the 3-digit and 4-digit models were all Series I. In era dating, I am guessing now, that the Series II 62ii and 62Rii were made in the last years of about 1988-90 (which is also the known estimated end date for the models). To be confirmed, this change may have been enacted on all 5-digit models ( and I've seen on 6-digit model with a zero start: "011,xxx"). The tonehole moved from the front center of the body tube to the rear, in line with the B & Bb. There are TWO versions of the Purple Logo 62  and 62R! WHAT?! How cool. I assume there are other differences worth researching, such as the placement of palm and side keys. Perhaps most intriguing to me is that you see the modern remake using this Series II version of the C# engineering. If that doesn't boost your preference in series I vs II, it's not just the Yamaha 82Z and 82ZR but also the Selmers and Yanagisawas. There must be an advantageous reason in tone and/or ergos that supports the major companies' designs.

So there you have it - this is the more advantageous vintage Yamaha YSS-62ii "Purple Logo" Soprano.

REBUILD: (Included) - TBD - It will get a WWS Standard Rebuild included and be a sweet soprano for your collection and enjoyment. You can order it and help choose the setup. However, left to my own methods, I would do a  similar setup as the factory original.

This is a Consignment instrument, however, is being sold as a normal WWS inventory which will include a rebuild at the listed price to your personal specifications.