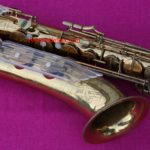 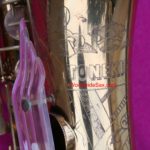 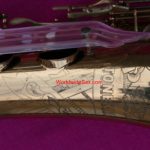 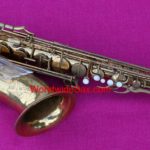 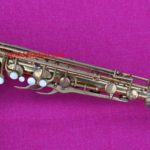 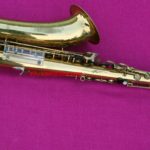 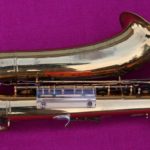 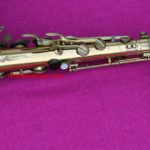 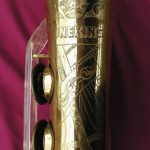 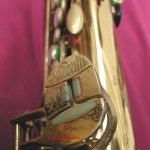 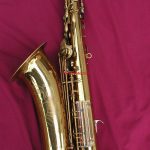 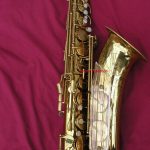 Sarge's words: This Tenor was identical to the "New King" model, but for one added key, a high F# Gizmo key... for this reason, JK decided to market the Tone King as the "Pro" model and the New King as the Standard.  Serial # 37,xxx, it was built in about 1959, they only made Pro models during these years.  These are supremely warm and smoky,  jazzy horns, built solid like a tank, just heavy and beefy... and the sound was like that too.  Keywork was great and ideas were stolen from almost every great pro horn to make this one.  The neck tightening screw is like a Martin, the toneholes are rolled like a Conn, G#/Bb cluster is similar to a Selmer SBA...  these can stand with any other horn from this era.  Highly undervalued, should be worth 4000.00, i have seen nice examples like this one go for 2500.00... but hey, they are rare too, and you know what happens to rare tenors.  [Sarge] rebuilt it with Saxgourmet pads and Resotech slightly domed, nickel resonators.

Chadd comments: I'm scared to touch these ones with the plastic guard. But I like the look! It's like watching a machine in action! SOUND!!! This sax has HUGE Power! The Treble boost CUTS through! I need a Sound File to prove this!

Notes: Case - TBD. Also, the G# trill bar/lever has been removed (gone), however, I've not seen many other plastic guards in good condition that compete with this one.