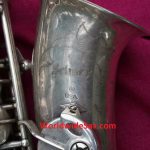 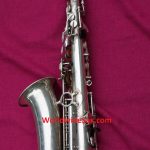 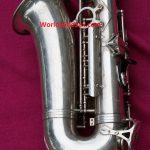 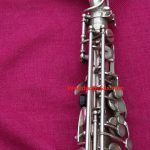 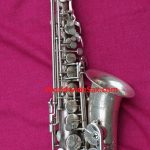 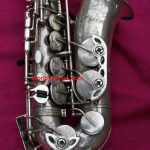 A entry-professional Selmer from the late 1980s - Model AS100. At #824k I will estimate its dating at 1988. Rare Silver plate in 97% condition. These are one of the best kept secrets in the sax world.--pro sax, "selmer", with all the ergos and tone you're after. Most people mistake the "USA" on the bell for the later student-line. Do not be fooled! She arrived with a few missing screws (I will replace with silver ones to match!) As someone one mentioned, these models and the like should be considered a cousin to the Mark VI; I like that description. ***these are far closer to the Mark VI tone than was the Mark VII(crisp)! - in my opinion.

REBUILD: The specifics are yet to be decided. I would love to plan a Full Rebuild on this one with special pads and/or resonators. I'll shine up all the silver, and help her sing the doors down!

CASE: Comes with a great Selmer hard case (like the Series I, II, III have) without the leather wrap, although the handles were repaired. Ask me about those.

This sax will be a super cool sax!